China is where the majority of Coach bags and wallets are made. However, you may discover some Coach bags are manufactured in Vietnam and two other countries. Third-party manufacturers are common and the only way to ascertain where a purse was made is to look either on the Coach creed or seam tag found in your purse.

Where Is Coach Made?

In 2017, Coach, Inc. changed its name to Tapestry, Inc with the SEC (Securities and Exchange Commission). Coach, Kate Spade and Stuart Weitzman brands fall under Tapestry, Inc. According to the 2019 Annual SEC Report (page 10), "During fiscal 2019, manufacturers of Coach products were primarily located in Vietnam, Cambodia, mainland China and the Philippines." The report also states that one vendor in Vietnam individually provided around 10% of the brand's total purchases. The information for each bag and where it was made can be found in the creed, by looking where it states Made In.

Brief History of Coach Creed and What It Signifies

The creed serial number system established the format of three number followed by four numbers. The first three numbers provide identification of the month, year and plant code when the bag was produced. The last four digits of the serial number are the model number.

Serial Number Changes in the 2000s

Sometime in the early 2000s, Coach added the number zero "0" as a prefix to the first three-digit series. The zero was used to signify the bag was Coach Factory Outlet bound. In 2006, the production numbers (last four) were increased to five digits.

Sometime around 2014, Coach added the letter F before to the last series of four digits (model number) to identify the bag as a Coach Factory. More recent Coach bags don't have the serial number stamped on the creed. The serial number was moved to a seam tag that states the location where the bag was manufactured appearing after Made In. 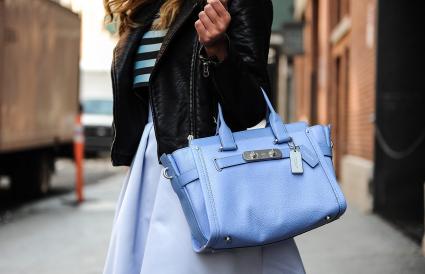 If you have any questions about your Coach bag, you can call Coach customer service at 888-262-6224. In the past, Coach had a specific number you could call and give your Coach bag serial number so the Customer Service Representative could check it against the company database. This service is no longer available. According to the Coach website, "We do not respond to requests to authenticate product or identify authorized distributors."

Where Are Coach Wallets Made?

Coach wallets, like Coach bags, are mostly made in China. In the past, some men's wallets were made in India. You can check the Coach creed and/or cloth label to see where your wallet was manufactured.

How to Determine If Your Coach Bag or Wallet Is Fake

There are many ways to tell if your Coach bag or Wallet is a fake. You can dissect each part of your bag or wallet and compare it to authentic ones. You can spot fake designer handbags by the quality of the materials and construction details specific to the Brand.

Discovering Where Coach Bags and Wallets Are Made

The serial number and Made In information are the most obvious ways to determine where your coach bag or wallet was made. Keep in mind that currently, most Coach handbags and wallets are manufactured in China.

0
Comments
© 2006-2021 LoveToKnow, Corp., except where otherwise noted. All Rights Reserved.
Resources, Advice & Tips for Covid-19
Read More
Where Are Coach Bags and Wallets Made?