Spotting a fake Michael Kors bag means noticing the counterfeit's lack of craftsmanship and paying attention to details. Other telltale signs are easily recognized once you know what to look for in the many parts that go into the construction of this designer handbag.

An authentic Michael Kors bag is made of Saffiano leather (crosshatch pattern) that is heavy and sturdy. The handbag side panel structure is firm and neatly tucked in.

Many fake bags use a pleather or other type of leather that is inferior to Saffiano leather. While the exterior is textured, it can easily fold, and some purses may have a crease on the front or back due to improper storage.

The side panels in fake MK bags are often made of two pieces of material and show a middle seam. The sides of a fake MK purse don't stay straight and firm to hold good form; they easily bend from the leather or faux leather being too soft. The rubber edging is made with two pieces and easily separates from the edge. The edging material is often plastic instead of rubber. 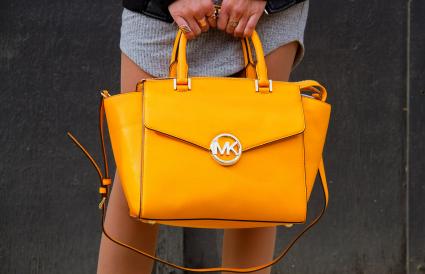 A sure way to tell if you've purchased an authentic Michael Kors handbag is to inspect the zipper opening. You will instantly be able to assess the authenticity of the bag.

The purse zipper opening always features a substantial metal zipper with a zipper stop. A zipper stop prevents the zip from moving beyond the zipper teeth and coming off track. The zipper also has a metal Michael Kors emboss zipper tag or a round metal MK logo that features the name Michael Kors centered underneath the open MK letters (see below for possible MK logo design differences).

The majority of counterfeit Michael Kors bags have plastic zippers for the openings. These counterfeit purses also don't feature a zipper stop.

You can easily spot a fake Michael Kors bag by paying close attention to the straps. Compare the lengths and quality of the construction.

Fake MK handbags feature a much longer shoulder strap than an authentic bag. The holes aren't punched the same distance from each other and there are a fewer number of holes than the real MK bag. The buckles are lightweight and don't feature the engraved logo.

The MK circle logo is used as a metal logo tag for a zipper or the K part of the MK logo is connected to the vertical M letter, making it appear as though the angled lines of the K emerge from the M.

It can be confusing when you use strict rules about the MK metal logo and fabric liner. These are often different in new handbag designs. It's always best to check with the Michael Kors website when you question the authenticity of a MK bag. A few of these include:

The purse lining pattern found in an authentic Michael Kors bag features a circle with the MK logo that is printed consistently on the fabric liner. The circle and MK logo are same color.

The pocket fabric of a Michael Kors handbag matches up with the back lining. This gives the lining a layered look since the fabric pattern is consistent. The lining for the purse is made of one piece of fabric. The pocket fabric layer is also one piece of fabric that is sewn to create the pockets and pouch. You will find the tops of the pockets in some MK bags trimmed in leather. 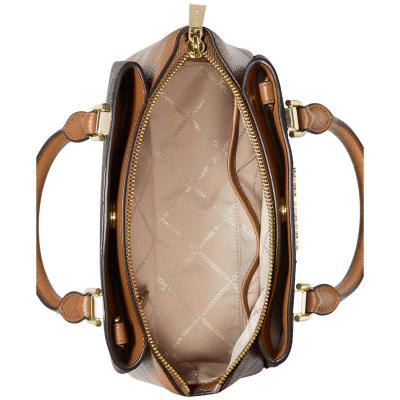 A fake Michael Kors handbag features glaring inconsistencies with authentic bags. The encircled logos often face opposite and a mix of different directions.For example, the back lining and the pocket lining don't match. The fabric of one of these is often sewn upside down.

Interior zipper pockets on real Michael Kors bags are usually plastic but are the same color as the lining. Fake MK bag zippers are usually a different color from the lining.

The stitching for the lining of a Michael Kors purse pocket always features double stitching. A signature triangle is stitched at the end of the sewn line. The stitching is always even.

The stitching used in counterfeit purses is inferior to the stitching of real Michael Kors bags. The stitching is uneven and doesn't feature the triangle closure.

Inside most MK bags, you'll find along the right side of the bag a pair of tags. The top tag is white and features the model number.

The Gray tag will feature the words Made in followed by the country of origin. This country can be China, Korea, Indonesia, Italy, the Philippines, Taiwan, Turkey, or Vietnam. The code directly below this information consists of two letters to identify the factory/plant where the purse was manufactured. This two-letter coding is followed by a hyphen and four numbers that give the date the bag was made, such as 4214, which means April 2, 2014.

You will find that older bags leather tags instead of cloth tags. The tags feature heat-stamped Michael Kors word logo.

A few tips can help you easily spot a fake designer bag from MK. You should consider all aspects and parts of a Michael Kors bag before deciding it is fake or authentic.

There are a few Michael Kors handbag designs that confuse first-time buyers when focused on one specific counterfeit sign. It's important that you look for various Michael Kors bag features so you can verify you're purchasing a real Michael Kors purse.