With the cost of designer handbags rising every season, many women who desire the look of high fashion without the high price tag turn to fake designer handbags. Unfortunately, fake bags are not only poorly constructed and less durable than the true items, they are also illegal.

Savvy consumers can easily spot fake designer handbags even if they've never seen a true designer bag. The quality of workmanship and other factors stand out on fake bags, and when designers are highly renowned for the exquisite work of their products, fakes are easy to notice.

One of the biggest indicators of fake bags is the price. True designer bags can be discounted, but they are never marked down to rock bottom clearance prices. Any seller that claims to have designer bags at too-good-to-be-true prices is telling the truth in one respect: the prices are too good to be true because, after all, they're not prices for true bags. If you see a Louis Vuitton Bag, for example, being sold for $40, you can bet your money it's a fake, since the prices for a real bag from this designer usually start at around $800.

The location the bags are being sold at is another indication of their authenticity; you won't be finding a genuine bag at a flea market or from a street vendor. To keep demand soaring, designers limit the number of each style in circulation, often restricting the number of bags one consumer may purchase in a specific time frame (typically three bags of one design per month). Any seller with a dozen of the same type of purse is likely trying to sell knockoffs rather than the genuine article.

The bags themselves are always the biggest source of verification about whether they're authentic or counterfeit. When examining a bag that may be fake, check different features, including: 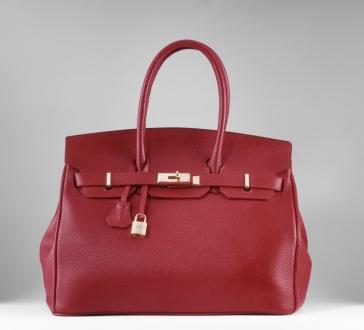 Because of the lucrative profit margin on designer bags, the temptation to counterfeit sought-after styles is very tempting for unscrupulous manufacturers. Asian nations, in particular, have the necessary technology to create knockoff bags with slight differences that can still fool the majority of consumers, especially individuals that may not be intimately familiar with true designs. Some fakes may even be produced in European nations, giving them the authority to claim they are made, for example, in Italy (one of the most respected nations for high fashion). 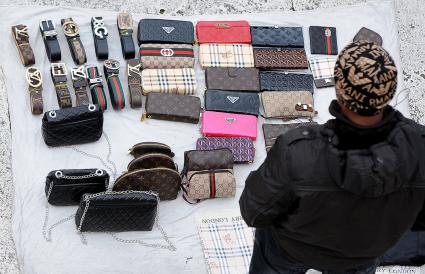 To increase the profit margin of counterfeit bags even further, the quality of fake purses is far lower than actual designer bags. Pleather or plastic may replace true leather, and gold-plated hardware may replace true gold pieces. Eager and naïve consumers often fail to note those discrepancies before inadvertently purchasing a knockoff piece.

Fake Handbags Illegal Use of Company Trademarks and Logos

Your Purchases of Fake Handbags Support Criminals and Terrorists

You aren't breaking the law if you only purchase a counterfeit handbag or a knockoff designer handbag. However, if you attempt to resell a counterfeit handbag, you can legally be charged. Before purchasing a counterfeit designer handbag or cheap knockoff, you should consider who you are supporting with such purchases. Both types of handbags are sold by criminal organizations that also sexually exploit women and children through human trafficking. In addition, the proceeds usually support terrorist activity.

How to Spot Fake Designer Bags and Take Action

If you find yourself with a fake bag, the affected designer may want to be notified so they can alter their designs and make such counterfeits easier to spot. Furthermore, it is a good idea to report any suspicious transactions or suspected illegal activity to proper authorities.