The high price tag of a designer bag isn't always feasible for the average consumer, but replica designer handbags can incorporate the features you love about the high-end designs, without the cost. Keep in mind that replicas aren't pretending to be designer bags in order to trick consumers; they are merely inspired by them.

You can find designer replica handbags at several stores. Some replicas are designed to look so much like the designer bags that they look like the real deal at first glance. Others are loosely based on designer styles, but in many cases, more than a quick glance will reveal that they are, in fact, merely inspired by a major fashion house's creation. Choose from styles that are designed to mirror higher-end bags or just try for one that loosely resembles some designer options out there that could cost hundreds or thousands of dollars.

Madewell's bag collection is pretty extensive. The descriptions don't point out how much they have in common with designer bags, but if you look closely, you'll see similarities. For example: 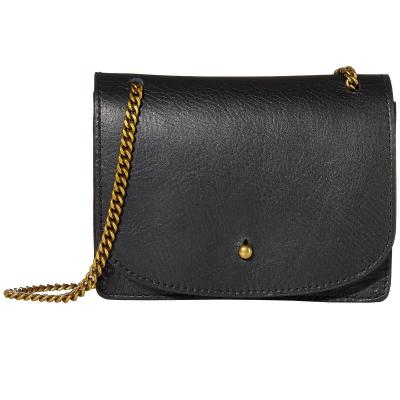 Madewell also offers replica designer handbags similar to Coach's drawstring bucket shoulder handbag, totes from Michael Kors, and more. You have 30 days to return or exchange a purchase from Madewell. These bags are sold at stores elsewhere, like Nordstrom, and have wonderful reviews. Their bags frequently get four- to- five-star ratings. People love that they can get aesthetics, versatility, and quality for a lot less than designer costs.

J.Crew also has a few styles that mimic those from designers. Here are a few to check out.

Other styles resemble bags from Marc Jacobs and Tory Burch, among others. You can purchase items from J.Crew in stores, over the phone, or online. Retail store purchases can be returned or exchanged for up to 30 days, while online and phone orders get a bit longer with 60 days. If you place an order in a J.Crew store to be delivered later, you'll also have 60 days to make your final decision.

AliExpress isn't so shy about skirting the line around logos, and their bags often use markings that look similar to major designers' (and there's something reminiscent of almost every designer). These bags aren't quite replica designer handbags, but are very close. For example: 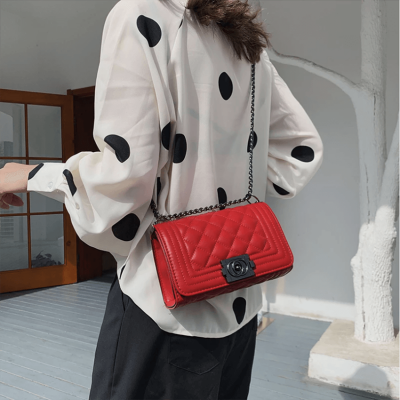 Other styles at AliExpress look similar to designer replica handbags like Gucci, Michael Kors, Kate Spade, and more. Overall, the reviews of AliExpress handbags are positive, but some reviewers report receiving crumpled products while others say the colors aren't what they expected (reviewers also frequently include pictures with positive and negative reviews, so you'll be able to see more examples before making a decision to purchase an item).

Shipping can take weeks depending on where you and the supplier live, and experience can vary by seller. Regardless of the seller, however, you do get buyer protection when you shop through AliExpress. If your item doesn't arrive, you'll get a refund. If the item isn't as it was described, you'll be eligible for a full or partial refund.

Do be aware that some bags come with the designer's name on them, but they are not from that designer. Take a look at the comparison between an authentic Michael Kors Jet Set Travel Handbag and a look-alike from AliExpress.

Amazon has what seems to be an endless parade of bags, so it's a sure bet that there will be some there that could be considered designer replicas. You aren't likely to find any that are so carefully crafted that they pass for the authentic handbags, sporting the designer name the way bags from some other stores do, but they could have just what you need if you're looking for a loose replica of a bag because you simply like the style of some more expensive pieces (rather than the status and superiority the quality designer bags tend to have).

Amazon handbags often come with the option of Prime shipping for members, and most items can be returned within 30 days for a full refund.

Target has a variety of purses that are loosely inspired by designer bags. Designers of bags that will be sold at Target seem to take some elements that high-end designers like to use in their handbags (quilted leather or studs, for example) and use those in their designs. For example: 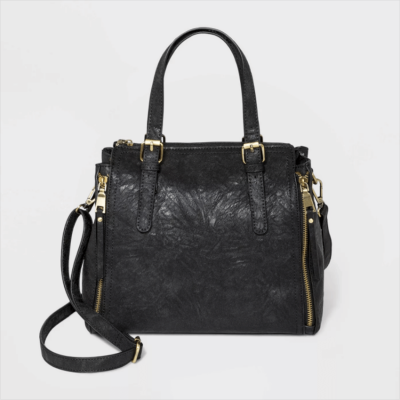 Target fashion selections vary with the seasons, so the bag options and designers they take inspiration from will shift as the year goes on. Target has a generous return policy, giving you up to 90 days to decide whether you want to keep an item (as long as it's still in new condition when you take it back).

Priced around $35, Walmart's C. Wonder Angelina vegan leather signature tote is very similar to the Tory Burch Gemini Link Canvas Tote that sells around $228. Both totes have a chain link background and a center dark stripe that is bordered by white and red stripes.

The care and craftsmanship that goes into a luxury label item are much higher than the average department store purse. But what makes the designer purses so outstanding?

The most prohibitive handbags are frequently cut from expensive materials such as genuine python, alligator, crocodile, or the softest calfskin leather imaginable, but it's not just the type of material that makes them so special. Many times a handbag is cut from a single piece of alligator or crocodile skin so that the design of the bag is fluid and congruous. Finding such specific materials is a costly and time-consuming process. Add features like 18 karat gold hardware, with an inner Japanese silk lining, and you have created a very ornate handbag.

Some designer handbags are so limited in their production that only a dozen or so are created each year. The Hermes Birkin bag will often boast a wait list of three years. These limited edition pieces are only made more enviable to consumers due to their narrow availability.

Most people can probably appreciate the effort that goes into making a designer bag. However, many consumers simply cannot afford or choose not to pay such prices in order to obtain the status of a designer handbag. This is where replica manufacturers come in.

A manufacturer may study the design of an upscale handbag carefully and memorize the style nuances. Some manufacturers attempt to create a likeness that can be sold for a much lower price (though sometimes still several hundred dollars) but is indistinguishable from the original to the average consumer. This is considered a fake or counterfeit handbag and is illegal. These counterfeit products will also bear a brand name or logo of designers such as Gucci, Chanel, Louis Vuitton, and even mid-level handbag designers such as Coach and Kate Spade.

There are some fake bags on the market that are advertised as "replicas" that are actually counterfeit. They're using the designers' names and signature patterns (like the Burberry check pattern or interlocking Gucci Gs) and though they aren't directly advertising that they're authentic to consumers, the bags can be represented to others that way once a purchase has been made. They are impressive copies that get all the details right and could be tempting to buy, but they're illegal.

Inspired-by replicas have a slightly different graphic, pattern, or design than the original. Colors and accent details may also differ from the inspiring design. On a designer-inspired purse, the logo will be altered from that of the designer so as not to violate copyright law. If it is a 'fake,' the logo will not be noticeably altered and will attempt to be as close to possible to the real logo to fool consumers.

It is a frequent occurrence when online shoppers spot a Chanel bag on an Internet auction that is several hundred dollars less than the average genuine Chanel bag. Believing themselves to have found the deal of the lifetime, they will purchase a retail-priced $1,700 Chanel bag for only $150 online, unaware that they have bought a fake handbag. If you come across a deal on a designer bag that seems too good to be true, it probably is.

Other manufacturers create handbags that are influenced by upscale designer bags and sell them at a much lower cost to consumers. These bags might be called replicas, knock-offs, or designer-inspired styles. These bags will not claim to be the original brand or bear the logo of the brand.

There are many terms used for handbags that simulate designer styles.

Replica purses are not produced according to the quality standards of the original luxury designer items. The craftsmanship will not be as precise and flawless as a designer purse.

While designer bags use high-quality leather, fabric and hardware, replicated bags typically use lower quality fabrics, faux leather and plated or plastic hardware. A high-end designer handbag, when cared for properly, can last decades. The average fake cannot boast an endurance level that is even close.

Persons looking to purchase replica handbags should understand that the luxury of an item is not in its label, but in its craftsmanship. People familiar with upscale luxury products will immediately notice a difference in the stitching and detail of a fake handbag when compared to their genuine counterparts.

The manufacturing of handbags that use the logo or exact style or design of a designer handbag is illegal. The production and sale of fake designer handbags cost American taxpayers millions of dollars annually. Such products are often created overseas under unsafe working conditions and then sold to consumers who possess little understanding of the ramifications of the counterfeit industry. Though counterfeit replica products lurk mostly on Internet auction sites, companies such as eBay are currently making a more pronounced effort to discourage counterfeit merchandise from being sold.

If you don't have the money for an authentic Hermes bag, and can't find a knock-off you love, you do have alternatives to purchasing a replica.

Quality Even Without a Designer Label

Many retailers produce reasonable quality goods that aren't necessarily as luxurious as a Prada product, but the designs can be similarly attractive. Counterfeit handbags are never elegant. It is preferable to possess a well-made genuine design, even if your handbag comes from a lower-end label, than to be caught carrying a forgery.